In Remembrance of Nellie Joe Murphy 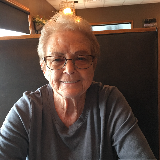 She was born on February 7, 1943, to Benjamin and Naomi Briggs. Nellie grew up in New Market, MO and in 1961, she graduated from North Platte High School.

On November 17, 1962, she was united in marriage to Richard Dean Murphy. After their marriage they lived in Dearborn, MO, Marion, IN, Platte City, MO, Edgerton, MO, Liberty, MO, and in 1974 they moved to Raymore, MO where they made their home. Richard passed away on September 26, 2015.

Nellie enjoyed reading, flower garden, socializing with friends and being with her family.

She was preceded in death by her husband Richard Murphy; her parents Benjamin and Naomi Briggs; and her son Richard Eugene “Gene” Murphy; brother Richard and sister Emma.

Private family burial will be held at a later date at Ridgely Cemetery.