In Remembrance of Mike Robinette 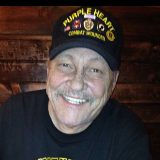 Mike served in the U.S. Army, was a veteran of the Vietnam War and was a victim of the Agent Orange chemical in battle areas. He was also wounded in Vietnam and received a Purple Heart. His family remains extremely proud of his service to our nation and his personal sacrifice.

Mike had been in ill health a long time and had been hospitalized numerous times during the past 10-plus years. Despite many battles with various health issues, he always maintained a great sense of humor. He was comfortable around anyone anywhere. Most importantly, Marilyn was No. 1 in his life. He also had fantastic love for his four sons and his grandchildren, nieces and nephews, with most living close-by and spending as much time as possible with him.

He was preceded in death by his parents, two brothers, and one sister.