In Remembrance of Michael T. Savage 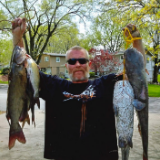 He was born on November 17, 1968 in Kansas City, MO. Mike grew up in Gladstone and graduated from Park Hill High School. He served his country in the U.S. Army during Operation Desert Storm where he did his basic training at Fort Benning, GA and was stationed in Wiesbaden, Germany. After he was honorably discharged, he returned home.

Mike was currently working for Elmwood Reclaimed Timber in Peculiar, MO as a machine operator. He enjoyed fishing, playing pool, woodworking and remodeling his Mom’s home. Mike loved spending time with his cat “Buddy” and spending Sundays with his friends Jackie and Paula watching football and playing cards. He was an avid Royals and Raiders fan.

He was preceded in death by his grandfather James Lytle.

Donations may be made in his memory to the KC Pet Project.