In Remembrance of Michael O'Donnell 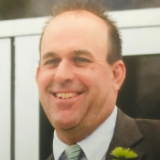 Michael was born in St. Louis, MO on January 21, 1964 to Ellen (Ogle) Moore. He grew up in Rolla, MO but spent the majority of his adult life in North Carolina as an Ironworker. He was very proud of his life’s work. He loved showing new Ironworkers the ropes and was especially proud to be a member of the Local 10 Ironworkers Union in Kansas City. He loved hunting and fishing, golfing, cooking and gardening.

In 2010, he renewed a friendship from grade school with Lori Moss and on September 12, 2014, they were united in marriage. They made their home in Kansas City.

He was preceded in death by his brother Jeffrey and his step-father Robert “Bob” Moore.

No services will be conducted at this time.