In Remembrance of Maxine McFadden 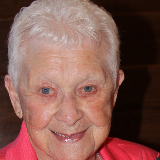 She was born on November 18, 1919 to Robert William and Mattie Loie (Matthews) Taylor in Gower, MO. Maxine grew up in Gower and graduated from Gower High School.

On February 24, 1939 she was united in marriage to Clifford L. McFadden, Sr. After their marriage they lived in Gower where they raised their children and later moved to St. Joseph. They owned and operated Standard Oil Company in Gower and Plattsburg for many years. Her husband, Clifford, passed away on December 13, 2005.

She was a member of Word of Life Church in St. Joseph. After her retirement she loved to volunteer at the Gower Convalescent Center.

She was also preceded in death by her parents, and her brother, Bill Taylor.

Donations may be made to Word of Life Church.