In Remembrance of Martin Eric Carter 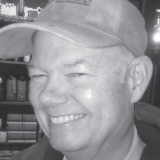 Martin Eric Carter, 64, of Plattsburg, Missouri, went to be with his Lord and Savior, after a lengthy, courageous fight with cancer on Monday evening, July 22, 2019. He passed into eternity while in St. Louis, Missouri, undergoing fur¬ther cancer treatment.

He was born on January 10, 1955, in St. Joseph, Mo. to Luther and Lois Carter of Plattsburg. He grew up in Plattsburg and went on to graduate from Plattsburg High School, 1973. After graduation, he attended Missouri Western State College, St. Joseph, Mo. where he received a Bachelor of Science Degree in Accounting.

His dad, Luther, owned and operated Carter’s Welding Shop in Plattsburg and Eric joined him in that endeavor after high school. Once he received his degree, he joined his father full time in the business. Their business was known for high quality work with special attention paid to area farmers. After his father’s passing, Eric went on to specialize in custom fabrication, custom fences and benches.

Services will be held on Saturday, July 27, at the First Baptist Church, Plattsburg. Visitation will be at 9 a.m. with funeral at 11 a.m.