In Remembrance of Martha Shumate 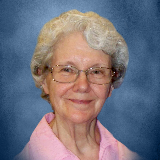 She was born on November 15, 1934 to William Aldon and Beulah Ann (DeWeese) Baker in Rushville, MO. Martha grew up in Rushville, Easton, and graduated from Plattsburg High School. On June 8, 1952 she was united in marriage to Robert E. Shumate. After their marriage they lived in Kansas City, Stewartsville, and in 1972 they moved to Gower where they made their home. Her husband preceded her in death on August 11, 2010.

Martha worked various places throughout her life, but her passion was her family. She had a kind and gentle spirit, showing love and grace to everyone around her. She volunteered in many capacities in church, in her community, and had a special interest in Adult Literacy. In later years she worked at the Gower Convalescent Center and was very dedicated to the residents.

She was a member of the Church of God Seventh Day in St. Joseph.