In Remembrance of Marilyn Finney 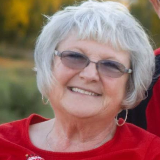 Marilyn was born April 28, 1944 to Ralph and Mildred Moser. Marilyn attended grade school in Gower and later graduated as Valedictorian of her class at Faucett High School. Later, she attended Northwest Missouri State University and received her degree in secondary education.

In August of 1966 she married her high school sweetheart, John Finney. They made their home on a farm just north of Faucett.

Marilyn taught social sciences for the North Platte School District until her daughter was born. During that time, she was a homemaker and helped John on the farm. She later worked for several commission firms at the St. Joseph Stockyards. After that she worked as the assistant director at Midland Empire Resources for Independent Living (MERIL), where she retired.

Marilyn enjoyed attending all her family’s activities. She enjoyed watching sports, especially the Chiefs and the East Buchanan Bulldogs football teams which her grandsons were a part of. Marilyn loved antique shopping and going out to eat. She also loved sitting on her front porch to read the newspaper and take care of her flowers.

She is survived by her husband John, daughter Andrea Veatch, son in law Chris Veatch, and grandsons Barrett and Blane; sister, Glenda Liday; several nieces and nephews, other relatives and many friends.