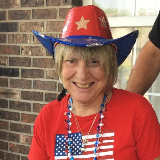 She was born on June 14, 1952 to Al J. and Millie T. (Gully) Klein in Sauk Centre, MN. The family moved to Valentine, Nebraska where Margy graduated from High School in 1970. Margy then received her nursing degree and worked at the Medical Clinic in Valentine. She also worked at her parent’s restaurant in Valentine.

Margy was a member of the Catholic Church.

On July 12, 1980 she was united in marriage to Lee Hartmann. After their marriage they lived in Valentine, NE later moving to St. Joseph to be close to family. After Lee’s retirement in 1999 they moved to Kerrville, Texas. Her husband, Lee, preceded her in death on July 6, 2016 and Margy returned to St. Joseph.

She was also preceded in death by her parents and nephew, Chad Klein.