In Remembrance of Louise Schaaf 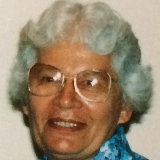 But that is only part of Louise's story.  Over the course of a long, rich life, she lived through a great deal and was many things to many people.

Louise grew up on a farm near Oregon, Missouri, well cared for by her parents, Robert and Florence Noellsch.  Her aunts, uncles, and cousins lived on nearby farms, and she enjoyed a thoroughly connected life, close to the land and surrounded by family.  From September through April, she attended one-room Lincoln School with her cousins and neighbors, getting there at first by buggy, then later riding her own horse.  When the summer break arrived, she would spend her days barefoot on the farm. She loved working outside with her father – helping him feed the hogs, plough the fields, put up straw, and harvest corn.  At other times, she would tend the garden with her mother, or serve as nursemaid to her baby sister Roberta, who was born when Louise was nine.  When there was free time, she and her cousin Floris would go fishing together with their fathers or entertain themselves with toys of their own design: blocks of wood for cars, empty tin cans for stilts.  The rest of the family was never far away, and they frequently came together, helping on each other's farms or gathering for picnics on Sunday – a day when they did not work.

As Louise grew older, she took on new responsibilities.  After high school, she left home for a time to earn her teaching certificate at St. Joseph Junior College, living on Colhoun Street with her grandparents during the week and then taking the train back to Oregon on weekends.  Soon she was teaching school in Oregon, supporting herself and helping her parents buy their first car.  She went on to earn her Bachelor of Science in Education at Northwest Missouri State University and land a better teaching job in Desloge, MO.  Then World War II hit.  As the men left for battle, she and the other women stepped up to fill new roles. Louise was recruited to coach softball, keep score at basketball games, and teach navigation classes at night. During this time, she made some of the best friends of her life – other teachers and women she boarded with and joined for outings on weekends.  She looked back fondly on her years in Desloge.

Sometime later, Louise was living in St. Louis when a man named Charley Schaaf came calling.  He stopped by to discuss car insurance with one of her roommates, but it was Louise who answered the door.  Charley, impressed with her kindness, asked her on a first date, then a second, then a third.  Soon they were married, and so began a new chapter in Louise's life.  Over the course of the next five years, she gave birth to three healthy children: Charles, Carolyn, and Robert.  She and Charley didn't have much money, but they worked hard, living in Missouri, Illinois, Georgia, and Florida.  Then in1963 Louise lost her father, and in 1966 the family moved to St. Joseph to be near her mother.  This was when Louise, having earned a Master of Arts in Education from Washington University, began her career at Central High School.

Louise was a rock for her family.  For her mother, whom she and Roberta looked after once her father was gone.  For her husband, of whom she was so supportive and whom she nursed through ill health toward the end of his life.  For her children, whom she loved and cared for as only a mother can.  And for her grandchildren, Robert and Renee, whom she taught not only algebra but also many other things: how to grow a garden, take things more in stride, and appreciate the magnificence of the natural world.

After her retirement, Louise enjoyed traveling the world with family, especially her daughter. She spoke often of the plants and animals she encountered and all that she learned connecting with people from other cultures. Throughout her entire life, she carried with her a deep appreciation of God’s creation, and her family saw this give her strength until the end of her life.

Louise died surrounded by family.  She requested that no funeral service be performed.

Memorials may be directed to a charity of your choice, and celebrations of her life may be mailed to Louise’s family at: 516 Pinewood Drive, St. Joseph, MO, 64506.

The family especially thanks Freudenthal caregivers and Hospice Home Health workers for all the loving care they gave Louise during her final months.