In Remembrance of Louanna Burton 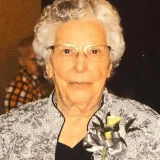 Louanna Gibson Burton was born on March 26, 1923 in Gower, Missouri in a farm house that is still in the Gibson family after more than 100 years. She passed away on September 30, 2021 at Gower Convalescent Center in Gower, Missouri.

Her ancestors were among the earliest settlers of the Platte Purchase area in Buchanan County, Missouri. Her parents were James William Gibson and Lula Deakins Gibson. There were ten children in the family, with two girls, the oldest, Gladys, and the youngest, Louanna, and eight boys (Theodore, Norman, Eugene, Robert, John, Richard, Lawrence and David) in between. She was the last of her brothers and sisters to pass.
She met her husband, Bill Burton, in Huntsville, Missouri, where she was teaching Home Economics. The family she was boarding with told her not to get too serious about anyone until their Bill Burton got home from the Navy. They were married on August 4, 1946. Two children were born to the marriage, Robert Edgar in 1952 and Audrey Sue in 1954. They had two grandchildren, Jason Aubrey born in 1975 and Matthew Robert born in 1987. There are three great grandchildren, Cooper Aubrey Bailey Burton, Fallon Louanne Bailey Burton, and Miles Robert Burton. Also surviving is Toni (Neidholdt) Burton, wife of Robert, Shannon (Bailey) Burton wife of Jason and Autumn (Blough) Burton, wife of Matthew as well as many nieces, nephews and great nieces and nephews.
Louanna was a graduate of the University of Missouri where her father had played football in the 1890’s and several of her brothers had graduated.
After their marriage, Louanna and Bill moved to Kansas City where Louanna taught Home Economics at Northeast High School and Bill taught Math, Science and coached football and basketball at Center High School. Bill had taught and coached in New Market, Iowa before joining the Navy in World War Two where he served in the Pacific Theater. While in Kansas City, Bill was accepted into Dental School at the University of Kansas City and graduated in 1952.
After Bill finished Dental School, they moved to Brunswick, Missouri where he practiced dentistry and Louanna raised the children. After the children were older, Louanna was asked to teach kindergarten in Brunswick, so she went back to school to get her degree in elementary education. She taught kindergarten in Brunswick for ten years until the Bob and Audrey were out of high school and then her and Bill traveled, with the first trip being from Brunswick to Alaska by car. They also had a cabin on a lake near Moberly, Missouri where the family had many good times.
They continued to travel together until Bill’s death in 1986. After his death she continued to travel with her nieces Jean, Janette and Jolene and her many friends. She loved to travel seeing every state in the nation as well as several foreign countries. She continued to travel into her 70’s. She was always excited for a new adventure and her passing will begin her greatest adventure uniting her with Bill, her mom and dad, and all her brothers and sisters. Bill and Louanna were active members of Brunswick Christian Church during their time in Brunswick.
At the age of ninety one, she moved to Liberty, Missouri to live in a senior apartment complex, where she could be closer to all her family. She had many friends at her apartment complex and enjoyed all the activities with her new friends. She enjoyed dining out with family and friends, always having room for dessert. She was an avid fan of MU sports and enjoyed keeping up with current events, particularly politics as she was a lifelong Democrat. She will be missed by all her family and friends. Enjoy your journey!
Funeral service is at Gower Christian Church, Gower, Missouri 11:00 a.m. with visitation at 10:30 on Tuesday, October 5th.
Burial is in Allen Cemetery, Gower, Missouri. The church will live stream the funeral on their You Tube channel and it will be available for later viewing.

Donations may be made to the Allen Cemetery or the Gower Christian Church.