In Remembrance of Lloyd Wilson 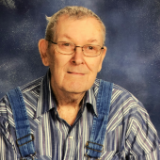 He was born on August 22, 1930 to Kemper Scott and Minnie Lee (Boydston) Wilson in Dearborn, MO. Lloyd grew up in Dearborn and graduated from Dearborn High School. He then served his country in the U.S. Marine Corps during the Korean War.

On May 16, 1958 he was united in marriage to Darlene Owen. After their marriage they made their home in Smithville.Lloyd worked for TWA, retiring after 20 years. After his retirement he worked for Coulter Bus Service. Lloyd was an avid Royals fan. He loved to travel in his RV around the country and sit at Smithville Lake and enjoy nature. Most of all, he loved his grandchildren dearly.

Lloyd was a member of the First Baptist Church in Smithville.

Funeral Service: 11:00 a.m. Friday, August 23rd at Hixson-Klein Funeral Home, Smithville with visitation one hour prior to the service.

Donations may be made to the First Baptist Church.