In Remembrance of Lewis Waters 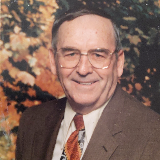 Lewis is also survived by his sisters: Lucille Meek and Louise (Roger) Ralston and by sisters-in-law Patsy Waters and Sandra Gordon and numerous nieces and nephews.

Lewis proudly served in the U. S. Army from February 1951 to November of 1952 during the Korean War. He served with the 92nd Field Artillery known as “The Red Devil Battalion.”  Lewis always remembered the people he met, who they were, where they worked and lived, and who their relatives were. He could tell you a story about each of them. Above all, Lewis was a family man and a farmer. He was employed by Miller Howard, Desert Gold Feed, and retired from Fred Isenhour Farms. His best days were on a tractor for hours at a time, working up a field, watching birds and deer. Then, after his work was done, he was satisfied coming back to a good home that he had made for his loving wife and children. He was a good man and will be missed.

No services are planned at this time.