In Remembrance of LaVaughn Ray 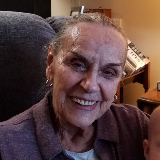 She was born December 18, 1928 to Ray and Goldie (Davis) Dwyer in Chinook, Montana. LaVaughn graduated from Central High School and later graduated from St Joseph Junior College in 1948.

On September 3, 1948 she was united in marriage to Gerald Ray. After their marriage they lived in St. Joseph where they made their home for 61 years. Together they built Colony House Furniture and owned and operated it for many years. Her husband, Gerald, passed away, January 2009.

LaVaughn was a member of the Wyatt Park Baptist Church. She was a soloist at First Christian Church and sang in a quartet at B’nai B’rith for holy days and Shabbot. She was also a member of Fort Nightly Music Performance Club. LaVaughn was an artist, who enjoyed china painting, watercolors and oil painting. She was a lifetime member of PEO Chapter BJ.

She was also preceded in death by her parents; and sisters, Ramona McDole and Louise Kerns.