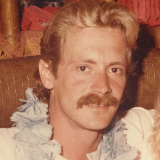 **DUE TO THE CORONAVIRUS, THE SERVICES ARE POSTPONED**

Larry started working and fathering at a very young age. Larry worked as a self employed siding contractor for 34 years. Running his own business he also employed all 3 of his sons. Larry enjoyed working outside at his home, hunting, canoeing and watching all sports. He really enjoyed playing fantasy football and having barbecues with all his children on football Sundays. Larry loved spending his spare time with his family and his dogs Buckwheat and Oreo.