In Remembrance of Kenneth Barton 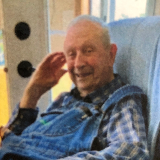 Kenneth LeRoy Barton was born to Tom and Jesse Barton, the seventh of 11 children, at Frazier, Missouri.

He attended Stamper and Gower schools. He served in the US Marines from October 1951 thru October 1953. He served with the front line troops during the Korean conflict and was Honorably Discharged in 1953.

He retired from Farmland Industries after thirty-three years of service. During his retirement, he enjoyed gardening, along with feeding the local squirrels, rabbits and birds. He was an avid wine hobbyist and enjoyed sharing his produce with others.

He is survived by his wife Mary of 66 years, all children and one sister, Colleen Gott of San Diego California. He was preceded in death by his brothers Floyd, Joe, Fred and Dewayne. Also, preceding him in death were sisters Evelyn, Mary, Geraldine, Iona and Gertrude.

Due to Covid 19 considerations, a graveside service for immediate family only will be held on November 4, 2020.

A celebration of life memorial with friends and family will be scheduled at a later date.