In Remembrance of John Gieringer 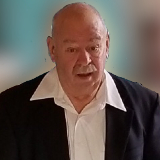 John was born on May 21, 1950 to George and Mary K (Harmer) Gieringer in Gardner, KS. In John’s early years, his family lived in various states; settling in Des Plaines, IL in 1962. He graduated University of Illinois in 1973 with a degree in Agriculture. After graduation from college, John moved to Edgerton, Mo

John married Terry Fee in 1985 and made a home in Edgerton.

John was a professional pipefitter managing many HAVC installations around the Kansas City area. In 2007, John received the Outstanding Mechanical Installment Award from the Kansas City Mechanical Contractors Assoc. for an installation at KU. John was a Pipefitter by trade, but a cattle farmer by passion. After retirement from the Pipefitter’s Union in 2010, John spent many happy years at his farm south of Edgerton. John also enjoyed photography and was quite an innovator and creative thinker. He designed and built his own home on the farm. He spent many happy years raising cows and enjoying young calves.

Due to the coronavirus, there will be no public family visitation. The funeral home will be open Sunday March 22nd from 2:00-7:00 p.m. to view and sign the register book at Hixson-Klein Funeral Home Edgerton, MO.

Private services will be held with burial at Ridgely Cemetery.

In lieu of flowers donations may be made to the Alzheimer’s Association. https://act.alz.org/site/Donation2?df_id=32112&32112.donation=form1&utm_source=google&utm_medium=paidsearch&utm_campaign=google_giving&set.custom.wt=giving&gclid=EAIaIQobChMIm8GTv4un6AIVxp-zCh0c5wg-EAAYASABEgI9hPD_BwE