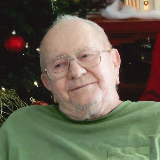 John was the oldest of 13 children, born to John D. “Jack” Donnelly Sr. and Joyce (Howard) Donnelly in Kansas City, MO. John married Laura Lee Zimmerman in 1951, and they had two sons, Terry Davis Donnelly and Timothy Lee Donnelly. After 21 years, John and Laura Lee divorced and he married Norma Shaffer in 1973. He then became stepdad to Norma’s daughters, Joyce, Susie, Barbara and Janice. He lived in Liberty, MO virtually all of his married life. A few years after Norma passed, he moved to a senior apartment in Lathrop, MO. His last 2 ½ years, he resided at Gower Convalescent Center in Gower MO, which he came to call “home”.

John left school after the 7th grade and went to work with his Dad to help support the family. As soon as he was able, he joined the Merchant Marines, as he was too young to join the Army. In March 1946, he joined the Army and proudly served until September 1947. After his honorable discharge from the Army, he worked various jobs until July of 1951, when he was employed by A.O Thompson Lumber Company. He retired in 1985, after being injured on the job.

John worked hard his entire life, not only at his paying jobs but at home, as well. He enjoyed working on his farm, running the tractor, mowing the pastures, building fence or taking care of the animals. There was always something to do and John was always doing it. And when he wasn’t working at home, he was busy helping friends, neighbors and family with any job that needed doing. He was a jack of all trades. If something needed built, remodeled or repaired, he could do it. He passed this knowledge on to his sons, who are eternally grateful.

John enjoyed being outdoors and fishing. He, along withhis brothers-in-law, found enough time to make a trip or two north to Minnesotato catch Northern Pike and Walleye.

In their later years, John and Norma enjoyed travelling. They took road trips to Colorado, Branson and various other places. Sometimes, they would just get in the car and take off, with no particular destination in mind. But John couldn’t get totally away from working even after his injury. He mowed not only his yard but several of his neighbor’s as well. It was not uncommon to see John, with ball cap cocked off to the side, heading down the road on his yard tractor, with either mower deck or snowblade attached, depending on the season.

The family would like to extend a special “Thank You” to the staff at Gower Convalescent Center and Three Rivers Hospice for the kindness and care they provided to John.

Private family burial will be at a later date at New Hope Cemetery, Liberty MO.