In Remembrance of Jim Riddle 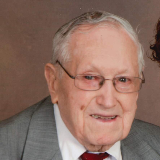 He was born on June 19, 1924 to John W. and Artie Mae (Sexton) Riddle in Dearborn, MO. Jim attended school and grew up in the Wallace area. He then served his country in the U.S. Army during the WWII.

On March 22, 1946 he was united in marriage to Dorothy Rose Meek. After their marriage they lived in Beverly, MO and moved to Smithville in 1953 where they made their home. After they retired, they moved to Birmingham, MO. His wife, Dorothy, passed away on November 12, 2002. In March 2012 he moved to Linn Creek at the Lake of The Ozarks.

Donations may be made to the March of Dimes and the American Cancer Society.