In Remembrance of Jerry Brown 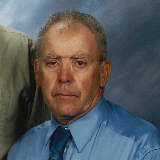 He was born on October 4, 1935 to Ernest Glen “Joker” and Leona Bernice (Schottel) Brown in Helena, MO and grew up in the Helena-Cosby area. In 1953 he graduated from Easton High School in Easton, MO.

On February 19, 1966 he was united in marriage to Carolyn L. Archdekin. After their marriage they lived in rural Agency where they made their home. To this union two sons Brian and Scott were born. Carolyn passed away on February 27, 2012 and Scott passed away on October 15, 2013.

Jerry worked as a machinist for Wire Rope Corporation of America in St. Joseph where he retired in 2003. He thoroughly enjoyed his work and during his time working he gained many lifelong friends.

Jerry was an active member of Ebenezer Methodist Church and was an East Buchanan FFA Alumni. He had a very outgoing personality and never knew a stranger. Jerry enjoyed hunting, fishing, and most of all, loved being around family and friends.

A Celebration of will be held later at Ebenezer Methodist Church.