In Remembrance of Jay Meyers 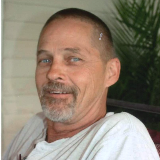 Jay was born in Joplin, MO on December 8, 1959 to John and Theresa Meyers.

Jay married Karen Goad in 1981 and they later divorced. From that marriage they had two sons, Justin and Matthew who gave them 5 granddaughters. Jay remarried in 2017 to Brenda Witherspoon. From that marriage he gained two daughters and three grandsons.

Jay made his career as a union carpenter and was a proud member of the St. Louis-Kansas City Local #110 Carpenter’s Union. He retired in May of 2018.In his younger years, his closest friends referred to him as Jaybird or Meyers. He enjoyed deer and duck hunting and fishing. Later in life, his grandchildren took priority. Spending time with the ones he loved was his favorite activity.

Jay was preceded in death by his parents.

I know deep down in my heart Jay would want to say much love to all his family and friends.