In Remembrance of Herman Seckel 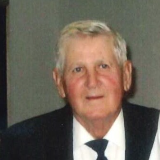 He was born on January 18, 1934, to Henry Franklin and Nora Mae (Blankenship) Seckel in Dearborn, MO where he grew up. Herman graduated from North Platte High School where he was on the football team and was known as “Crazy Legs”.

Herman lived in the Dearborn area where he farmed. He collected rocks, arrowheads and any Indian artifacts he could find. Herman never met a stranger and loved telling stories. Most of all he loved being with his family especially his nieces and nephews.

He was a member of the Dearborn Methodist Church.

Herman was preceded in death by his parents; brothers, Lewis, Leonard, Fuzz, Harvey and Lum Seckel; an infant brother; and brother-in- Ernie Clayton.

He is survived by his sisters Emma Jean Clayton, Shirley Kier and husband Dean, and Rose Downing and husband David; several nieces and nephews, other relatives and many friends.