In Remembrance of Greg Hixson 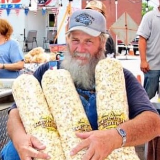 He was born October 11, 1956 to Robert and Ruth (Hurt) Hixson. Greg grew up in rural Plattsburg and graduated from Plattsburg High School in 1975.

He was united in marriage to Brenda Coble on October 2, 1990. They made their home in rural Plattsburg where they raised their daughter, Sarah.

Greg owned and operated Hixson Trucking for over 47 years where he hauled grain and livestock. Farming, baling hay and raising cattle was another passion of his. In his spare time he enjoyed hauling and going with his daughter to horse, mule and livestock events. In recent years, he would be found on weekends helping with their kettlecorn business. He had a love and passion for Kenworths, Chevy trucks and fast cars.

He had an infectious smile and rarely knew a stranger.

A kindhearted person who was always willing to help anyone out.

He was preceded in death by his parents, Robert and Ruth Hixson.

He is survived by his wife, Brenda Hixson and daughter, Sarah Hixson (Josh Wiederholt), brother, Terry Hixson, other relatives and many friends.