In Remembrance of George Anderson 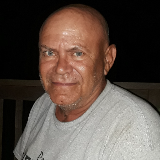 George graduated from West Platte High School in 1967 and later received his bachelor’s degree in History.

After high school, he proudly served his country in the U.S. Marine Corps reaching a Sergeant level during the Vietnam War where he received several medals, most importantly the Purple Heart Medal.

George was a loving husband, stepfather, brother, uncle, cousin and friend. In the summer, he loved to plant vegetables and maintain his garden and shared the bounty with friends and family. George always saw the best in in everyone. He had a huge heart and was known for his kind personality. He would help just about anyone who asked without blinking an eye. He loved spending time with his buddies at his shop, watching football, baseball, playing poker, or just hanging out. He was an avid Chief’s and Mizzou football fan.

George is survived by his wife of the home, Amy (Duesenberg) Anderson, two stepsons, Donovan Buttman and Caleb Duesenberg, and long-time friend William Kelley. He is also survived by his sisters, Jaime Anderson, Lil Frost, April Anderson, and Dawn Booth and many other friends and family.

George will be missed by many. Military honors and a Celebration of Life will be held at a later date when friends and family can gather safely.