In Remembrance of Gene Meade 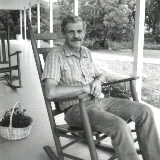 He was born on April 18, 1936, to John and Maudie Mae (Hook) Meade in Easton, MO where he grew up and graduated from Easton High School. He then served his country in the U.S. Army where he was stationed in Germany.

On February 3, 1963, he was united in marriage to Venita Irene Mayes. After their marriage they lived in St. Joseph, MO, moving to Easton in 1965 where Gene built their home. Venita passed away on April 9, 1993.

Gene was a printer for West Tab and Mead Products where he retired after 40 years. He was an active member of Midway Baptist Church and later Gower Baptist Church. He was also a member of the Easton Lions Club and was a past Mayor of Easton.

Donations may be made to InterServ St. Joseph, MO.