In Remembrance of Flora Lue Roberts 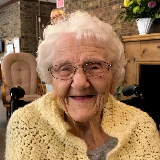 She was born on September 3, 1916 to Charles Jefferson and Bertha Caroline (Waganblast) Jackson in Agency, MO. Flora grew up in Agency and graduated from Agency High School as valedictorian in 1934.

On May 10, 1952 she was united in marriage to Arthur M. “Buster” Roberts. After their marriage they lived in Agency where they made their home. Her husband, Buster, preceded her in death on March 29, 1997.

Flora worked for the Department of Agriculture for many years. In her later years, she was a homemaker and a caretaker for her parents.

She was also preceded in death by her parents; brothers, Norman Jackson, Marvin Jackson, and Ralph Jackson; and sisters, Pearl Kelley and Elsie Ritchie. Flora is survived by nieces and nephews, other relatives, many friends and her Deshon reunion family.

Funeral Service: 11:00 a.m. Thursday, July 22nd at Hixson-Klein Funeral Home, Gower with visitation one hour prior to the service.