In Remembrance of Evelyn F. Grace 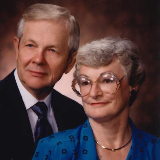 She was born on February 16, 1929 to Barnard and Lucille (Duncan) King in Darlington, MO. Evelyn graduated from Albany High School in 1947. She attended Northwest Missouri College in Maryville, MO. Evelyn taught in rural schools in Gentry County.

On August 14, 1949 she was united in marriage to E. Merwyn Grace. They made their home in Maryville for a short while before moving to Columbia, MO where Mr. Grace finished his college degree in Vocational Agriculture. In 1951 they moved to Gower where they made their home.

Evelyn taught Kindergarten in her home for three years and was a salesclerk at Hirsch’s Department Store and The Village Shop both in St. Joseph. She also worked at the Platte Purchase Antique Barn just outside of Gower.

Evelyn enjoyed serving her church. She was a member of the First Baptist Church of Gower where she served faithfully in many positions and over the course of 60 years taught every age range in Sunday School. She liked playing bridge and taught over 50 individuals beginning bridge lessons. She loved getting together with family on special occasions.

In lieu of flowers, donations may be made to Education Ministry at The First Baptist Church of Gower.