In Remembrance of Eugene Shipley 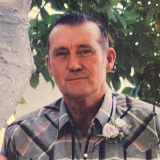 He was born on September 9, 1946 to Chester Willard and Helen Doris (Lash) Shipley in Kansas City, MO. Eugene grew up and attended school in Smithville. He then served his country in the U.S. Army during Vietnam War where he received a Purple Heart.

On May 2, 1970 he was united in marriage to Barbara Jean Foster. After their marriage they lived in Smithville where they made their home.Eugene worked for Lake City Arsenal for many years and retired from the City of Smithville. He was a volunteer for the Smithville Fire Department for over 20 years. Eugene was also a member of the Smithville American Legion and the Odd Fellows. He was of the Christian faith.

He was preceded in death by his parents, infant twin sons, Clinton and Kevin; sister-in-law, Betty Jones; special niece, Macklyn; and father-in-law and mother-in-law, Marvin and Martha Foster.

Donations may be made to the Smithville American Legion.