In Remembrance of Elizabeth J. Blackwell 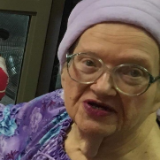 She was born on December 6, 1943 to Willard David Payton, Jr. and Nina (Norris) Payton in Kansas City, MO. Elizabeth grew up and attended school in Smithville.

On October 15, 1966 she was united in marriage to Herbert L. Blackwell in Smithville. After their marriage they lived in various places including Colorado and Hawaii during her husband service in the military.

Elizabeth raised her sons in Smithville while working for PT Industries as a bookkeeper. She also served as an Alderman for the City of Smithville.

She was preceded in death by her father Willard David Payton, Jr. and her husband SFC Herbert L. Blackwell, Ret.

Elizabeth is survived by her sons, David Blackwell and Aaron Blackwell, both of Smithville, three grandsons, Nicholas, Garrett, and Malik; her mother Nina Norris Payton, Smithville, sister Charlotte Payton-Newell, Kansas City; several nieces and nephews, other relatives and many friends.