In Remembrance of Elaine Chastain 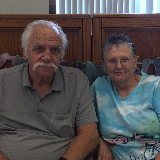 Elaine was born on February 22, 1936, to Herman Martin and Fontela (Wisley) Goetz in Purdy, MO where she grew up, and in 1954 graduated from Purdy High School.

On July 7, 1955, she was united in marriage to Jack Chastain. After their marriage they lived in Kansas City, MO. After their retirement they moved to Roach, MO. Jack passed away in 2016.

She was preceded in death by her husband Jack Chastain; her parents Herman and Fontela Goetz; her twin sister Eileen Harris; her brothers Danny Goetz and Ricky Goetz and son-in-law Jack Tanner.