In Remembrance of Duane Wiley 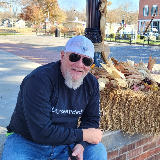 He was born on November 1, 1961, to Burl Franklin and Beverly Ann (Frederick) Wiley in St. Joseph, MO where he grew up and graduated from Central High School in 1980.

Duane worked for Chase Poe Candy, Monfort Pork, G&L Mill Work and was currently employed at Boehringer Ingelheim all in St. Joseph. He was a hard worker who always took pride in all he did and the many lifelong friends he made wherever he worked.

On July 7, 2007, Duane and Sally were united in marriage. They enjoyed their life together in Gower where they were proud members of the Gower Lions Club and active in the community. He was a huge supporter of the East Buchanan Bulldogs, St. Joseph Griffons Hockey Teams, and KC Club North Volleyball. Duane enjoyed riding his Harley, anything Evel Knievel, keeping his cars clean, traveling, going on adventures, family vacations and was a frequent concert goer. Most of all he loved every single moment he had with his wife, kids, and the light of his life his precious grandbabies.

He was met at heavens gates by his parents Burl and Beverly Wiley, his sister Dianna Lynn, grandparents, brother-in-law Richie Crow, other family members, and his loyal fur-baby Kemp.

Donations may be made to the Gower Lions Club.