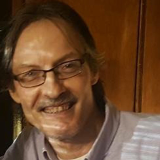 He was born on June 4, 1962 in King City, MO and he served his country in the U.S. Army.   Doug worked in construction for St. Joe Fuel and Oil for many years.  He was a hard worker, enjoyed tinkering on cars and remolding his house.  Doug was a big hearted loving guy who loved family gatherings and spending time with his family and friends.

Graveside Inurnment will be held at a later date at Bolckow Cemetery.