In Remembrance of Dorothy Kretzer 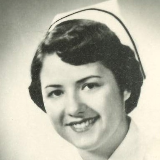 Dorothy Mae (Giles) Kretzer, of Gower, MO passed away January 17, 2021 at 86 in the home surrounded by family.

She was born on January 2, 1935 to Orville and Stella (Wisneiski) Giles in Saint Joseph, MO. She attended school for 7 years at Cathedral and her 8th year at Saint Patrick's. She attended high school at The Convent of the Sacred Heart. Dorothy was a nursing resident at the Saint Joseph Hospital in Kansas City affiliated with the College of Saint Theresa where she worked on the medical ward floor. She then returned to the old Saint Joseph Hospital and worked on the Pediatric and Post-Surgical floor. Dorothy retired from the Gower Convalescent Center where she worked for 25 years as director of Nursing.

On February 9, 1957 she was united in marriage to Richard Michael Kretzer, Sr. and they raised three sons.

She was preceded in death by her parents; husband, Richard; and son, Mark Kretzer; sisters, Betty Saverino, Sue Stone and Dolores Lorenz; brother, Jim Giles; and nephews, Jeff and Daniel.

In lieu of flowers Dorothy requested Masses offered or donations to Mosaic Hospice.