In Remembrance of Dorman Sallee 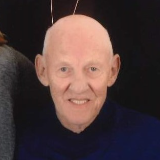 He was born on December 13, 1935, to Kelley and Clara (Johnson) Sallee in Noble, Missouri. Dorman graduated from Ava High School. He was a sharpshooter for the Marine Corps for four years.

On April 16, 1960, he was united in marriage to Marjorie Loretta Bryan. After their marriage, they lived in Overland Park, KS where they made their home. After Marjorie passed away on May 19, 2012, Dorman moved to Smithville, MO to live with his daughter.

He was an active member of First Southern Baptist Church of Overland Park, Lenexa Baptist Church and later Kearney First Baptist Church. Dorman retired from General Motors after a life-long career. He was an avid outdoorsman and enjoyed hunting, fishing and taking care of his yard and garden.

He was preceded in death by his wife Marjorie Sallee; his parents Kelley and Clara Sallee; his brother H.K. Sallee; and his daughter-in-law Faye Sallee.

Donations may be made to Kearney First Baptist Church.