In Remembrance of Doris A. Cox 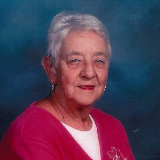 She was born on March 22, 1936 to Virgil and Lorena Summers. Doris attended and graduated from Smithville High School.

Doris was united in married to Carrol Cox in 1955. After their marriage they made their home in Paradise.

She was a member of the Paradise United Methodist Church. Doris worked for Clyde’s Paradise General Store for over 20 years. She enjoyed watching the Chiefs and Royals along with her grand kids.

Doris was preceded in death by her husband Carrol Cox; her son Mark Cox; her parents Virgil and Lorena Summers; and her brothers Don and Robert Summers.

Donations may be made to the Paradise United Methodist Church