In Remembrance of Donna Livingston 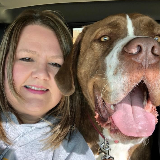 Link to the live stream of the funeral service:  https://youtu.be/W7BifXxbV9w

She was born on December 15, 1967 to Leroy Wayne and Phyllis Elaine (Farr) Davis in St. Joseph, MO. Donna grew up in rural Gower and in 1986 she graduated from East Buchanan High School.

On August 3, 1991 she was united in marriage to Patrick “Pat” Kim Livingston. After their marriage they lived near Gower, where they made their home. Pat passed away on February 20, 2005. In June of 2012 Donna was united with her partner Kirby Crump and he became her and her daughter’s “rock”.

She had an incredible gift and talent for crafting and a passion for baking and cooking. She was a perfectionist and spent many hours decorating her cookies and cupcakes for birthdays, baby and wedding showers, Carly’s volleyball team and any other occasion. If you gave her a theme, she would always deliver above and beyond your expectations. Donna loved riding motorcycles, anything Harley and the KC Chiefs. Most of all, Donna never missed an activity and was her family’s #1 Fan.

She was preceded in death by her husband Pat Livingston; her parents Wayne and Elaine Davis; her father-in-law Jack Livingston; nephew Travis Spaeth.

At the family’s request, please wear your “Donna Shirt”, a KC Chiefs shirt, a Bulldog shirt or anything leopard print or bright colors.

Donations may be made to Donna Livingston Memorial Fund c/o the Bank of Gower, for the education of Carly Livingston.