In Remembrance of Diana L. Keller 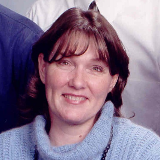 She was born on November 10, 1956 in Los Angeles, California where she grew up and graduated from High School. In 1990 she moved her family to St. Joseph, MO. Diana received her Bachelor’s Degree from Missouri Western State College in St. Joseph and her Master’s Degree from Friends University in Kansas City.

On March 3, 2007 she was united in marriage to James H. “Butch” Keller. They lived in Faucett, MO and St. Joseph, MO. She enjoyed bowling, playing darts, crossword puzzles, and jigsaw puzzles. Most of all Diana loved being with Butch, her children, and her grandchildren.

She was preceded in death by her mother Gwen Dora (Ramage) Hawkins and her brother David Hawkins.

Services will be held at a later date.