In Remembrance of David Meyers 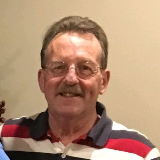 He was born on April 28, 1950 to John Louis and Dorothy Marie (Walden) Meyers in South Bend, IN. Skitch grew up in Carrroll, IA and attended Kuemper Catholic High School. Skitch wanted to raise his family in the mid-west, moving his family to Smithville in 1996.

He was a member of the Good Shepherd Catholic Church in Smithville. Skitch worked as an automatic door installer for several years. He loved music, good food, all sweet treats, golfing and was an avid Iowa Hawkeyes Fan. Most of all Skitch loved making people laugh, telling “corny dad jokes” and being a dad to his three daughters.

Skitch was preceded in death by his parents John and Dorothy Meyers; brother Michael Meyers and sister Annie Meyers.