In Remembrance of Craig Southards 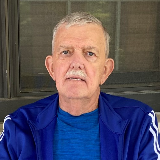 He was born on September 22, 1951 to Robert and Opal (Ludwig) Southards in Ozark, MO. Craig grew up in Bradleyville, MO and in 1969 he graduated from Bradleyville High School. During high school he was a member of the 1967-1968 basketball team that won the class S State Championship and were inducted into the Missouri Sports Hall of Fame.

Craig retired from Superior Boeing after several years. He loved working in his yard and was very proud to of been a volunteer firefighter for the City of Kearney for several years.

He was united in marriage to Debbie Fowler in 2005. After their marriage they made their home in Trimble, MO.

Craig was preceded in death by his mother Opal Southards.

Celebration of Life will be held from 11:00 a.m.-2:00 p.m. Saturday, January 8th at ReeceNichols Community Room in Kearney, MO.

In lieu of flowers, donations may be made to the Alzheimer's Association.