In Remembrance of Charlotte Mead 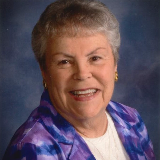 She was born on February 22, 1940, to R.D. and Iris (Vaughn) Everett in rural Gower, MO.  Charlotte was a graduate of Gower High School, class of 1957, and Caster’s Beauty Academy.

Charlotte was a beautician at Margaret’s Beauty Shop and the Gower Convalescent Center for many years, retiring in 2006.  After retirement, she enjoyed many happy years of babysitting her great-grandchildren.  Charlotte was a lover of flowers, reading, cooking/baking, playing games and above all her family.  She hosted weekly Sunday dinners for her family every week up until the very last week of her passing.  Charlotte was a woman of faith who loved and served the Lord with all her heart.  She was a member of the Wyatt Park Christian Church.  She was also a member of the Gower Lion’s Club.

She was preceded in death by her husband, parents, brother and sister-in-law, Bob and Jane Everett, sister by marriage and brother-in-law Beverly and Ed Carpenter and a beloved uncle John Wilson.

Memorial donations can be made to the Gower Lion’s Club or Wyatt Park Christian Church.