In Remembrance of Charlotte Kerns 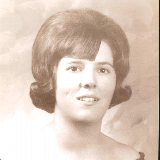 Charlotte Jean (Garr) Kerns was born September 21, 1949, to Charles and Norma Jean Garr, who preceded her in death. Charlotte graduated from Union Star in 1967. She married Lonnie Kerns on June 30, 1969. After their marriage they lived in Northwest Missouri moving to St. Joseph in 1977 where they made their home.

She worked at Heartland Hospital for 28 years, where she retired. She was a member of the Stewartsville Community of Christ. She enjoyed volunteering at the Second Season Thrift Store in her free time.