In Remembrance of Charles "Chuck" Preddy 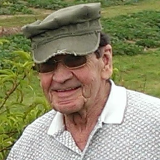 He was born on March 10, 1931 to Jess I. and Ima (White) Preddy in Cassville, MO where he attended Cassville grade schools and graduated from Cassville High School. Chuck was employed with Culver Funeral Home. He then served his country in the U.S. Army as a CPL in the 531st Anti-Aircraft Battalion during the Korean War until 1955. After his honorable discharge he moved to St. Joseph.

On November 4, 1956 he was united in marriage to Alberta “Petey” L. (Sturman) Mounkes. They were married during a 4-ring ceremony and were united into one family with Petey’s children Lynda Sue Mounkes, age 5, and James Eugene Mounkes, age 4. This was the start of his life and he loved and enjoyed it. Chuck and Petey made their home in St. Joseph. His wife preceded him in death on December 8, 2009.

Chuck worked for Lorillard Tobacco Company from 1959-1989 and retired after 30 years. After his retirement Chuck and Petey, spent their winters in the Rio Grande Valley, Texas and their summers in Carthage, MO until 2005. They returned to St. Joseph where they enjoyed spending time with their family, especially their great-grandchildren. Chuck was affectionately known to his family as “Gramps”, who loved him and will miss him dearly.

He was also preceded in death by his by parents, three brothers, Raymond Preddy, Lilburn Preddy and Joseph Preddy; and sister, ZetaMay Ashens.

A family inurnment will be held at a later date at Allen Cemetery, Gower, MO.