In Remembrance of Charlene Geniuk 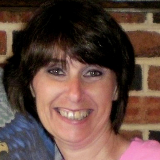 She was born on August 28, 1962 to Lawson Kermit and Lucille Mae (Ward) Palmer in Paola, Kansas. Charlene grew up in Paola and graduated from Osawatomie High School.

On August 21, 1999 she was united in marriage to Eugene Lawrence Geniuk. After their marriage they lived in the Kansas City area. Her husband, Gene, preceded her in death on October 7, 2017.

Charlene worked at Walmart on Boardwalk in Kansas City for over 15 years and had many friends there. She was always ready to speak her mind, she may have been tiny but she was mighty. Charlene never knew a stranger and had a bubbly outgoing personality. The most important thing to her was her family.

Charlene was a member of the Good Shepherd Catholic Church.

She was also preceded in death by her parents, and brothers, Charles Clark and Wayne Clark.