In Remembrance of Catherine Henley 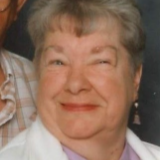 She was born on October 13, 1933 to Robert J. and Bertha A. (Wolf) Schmitt in Sedalia, MO. Catherine grew up in Kansas City and graduated from Paseo High School.

On October 24, 1953 she was united in marriage to James Truman Henley. After their marriage they lived in Kansas City and moved to Holden in 1963. In 1977 they moved to Clinton where they owned and operated Henley Farm Supply. In 1980 they returned to the Kansas City area and in 1996 they moved to Plattsburg. Her husband, Jim, passed away October 10, 2016.

She was a member of St. Ann’s Catholic Church in Plattsburg, MO. Catherine loved to write poetry and had several of her poems published. She was a volunteer at the Lee’s Summit Hospital in the 1980’s. Catherine loved her family and was always prepared to feed anyone that stopped by for a visit.

She is survived by her son, Francis “Frank” Henley and wife Barbara; granddaughters, Michelle Henley and Jamie Salsberry and husband Brandon; great-grandchildren, Holly and Aaron Horn, Talia and Trevor Brown and Makayla Salsberry; and sister-in-law, Alma Huff; several nieces and nephews, other relatives and many friends.

Mass of Christian Burial: 11:00 a.m. Friday, September 13th at St. Ann’s Catholic Church, Plattsburg, MO with visitation one hour prior to the service.