In Remembrance of Carol Williams 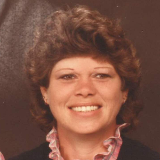 She was born on August 31, 1949 to Allen Duane and Carol Yvonne (Yackle) Breckenridge in Smithville, MO. Carol grew up in Lathrop, MO and in 1967 graduated from Lathrop High School.  In 1969, she received her cosmetology certificate from Casters Cosmetology School in St. Joseph, MO.

On June 10, 1972 she was united in marriage to Keith Williams. After their marriage they lived in Lathrop, Agency and made their home in Gower, MO. In 2012 they moved to Oklahoma.

Carol was a beautician, owning Carol’s Cove where she had shops in area nursing homes. She was a past member of the Lathrop Baptist Church, Lathrop, MO, Frazier Baptist Church, Agency, MO and was a current member of the Twin Oaks Cherokee Baptist Church in Oaks, Oklahoma. She was also a member of the Sweet Adelines in Lathrop, MO. Carol was an animal enthusiast and enjoyed attending horse shows and livestock shows with her husband and boys. She took pride being a housewife, keeping her house clean and spotless.  She was also a great cook and hosted many family dinners.  Carol loved doing anything she could for the people in her life. Most of all she was a wonderful wife, mother, grandmother and friend.