In Remembrance of Bubby Hensley 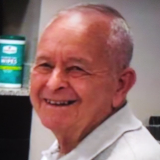 He was born on April 15, 1945 to Milton M. and Ruth (Stewart) Hensley on St. Joseph, MO. Bubby graduated from North Platte High School. He then served his country in the U.S. Army during the Vietnam War.

On February 21, 1969 he was united in marriage to MaryDean Perkins. After their marriage they Platte County.

Bubby worked for the MO State Highway Department for 30 years. After his retirement, he worked for the City of Platte City for 13 years. He was an avid mechanic and accomplished carpenter.

He was preceded in death by his parents and his daughter, Tammy Jordon.