In Remembrance of Bruce Lackey 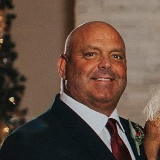 Bruce Lackey, 58, of Kansas City, Missouri, passed away on April 12, 2021, at North Care Hospice, after a battle with liver disease.

Bruce was born on January 19, 1963, to Betty and Gary Lackey in Kansas City, MO. Bruce attended Smithville High School and graduated in 1981. Bruce was very active in Boy Scouts Troup 412 in Smithville during his youth and attained the Eagle Scout designation in 1980. He played many sports during his high school years, but his true love was football. After graduating from Smithville he attended Northwest Missouri State University in Maryville, MO. where he earned a double degree in Business and Management. During his time at NWMSU he served as a Bearcat Yell Leader as well as teaching NCA cheerleading clinics throughout the country.

After graduation, Bruce followed in his dad's footsteps and went into furniture sales. In 1988, he met Kim Tomc and was united in marriage on November 26, 1990. Bruce and Kim have three children, Michael, Lanie, and Alex, and three grandchildren, Lola, Lincoln, (Lanie) and Hayes (Michael).Bruce's family meant more to him than anything else in the world, something he often mentioned. He was unendingly proud of his children which was evident in his support of the boys playing football or Lanie cheering and dancing for the Raiders, St. Pius X, and Rockhurst. Many people commented that Bruce missed his calling as a coach.

Lanie made him a grandpa for the first time with her daughter Lola, who was the light of his world. Two additional newborn grandsons (Hayes and Lincoln) only knew their grandpa briefly but will always remember him by the stories that will be told, and for his Donald Duck impression that entertained kids of all ages.

Bruce was a loving son, father, and husband. His family was so blessed to have had the last month with him to laugh, cry, share stories and let him know how much he was loved. Bruce is survived by his wife Kim, sons Michael (Taylor) and Alex (Madison), and daughter Lanie Pearl (Noah), his parents Betty and Gary Lackey, his siblings, Brian, Steve and Lisa as well as many nieces and nephews.

The family asks in lieu of flowers to please consider donations to the Bruce Lackey Memorial Fund.