In Remembrance of Bob Ruoff 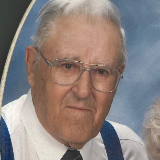 He was born on March 31, 1918 to Herman E. and Anna H. (Blosser) Ruoff in Easton, MO where he grew up and attended school. Bob served his country in the U.S. Army during WWII.

On September 10, 1949, he was united in marriage to Claretta “Katie” Hanway. After their marriage they lived in Easton, Plattsburg, Gower and lastly Stewartsville where they made their home. Katie passed away on September 21, 2009.

He retired from Affiliated Foods as a delivery driver in 1981 and was a member of the Teamsters Union. He was a lifelong hobby farmer and loved to be on his “Oliver” tractor. Bob enjoyed gardening, coon, frog and mushroom hunting, being outside and spending time with his family and friends. He never knew a stranger.

Donations may be made to Three Rivers Hospice