In Remembrance of Bob Moore 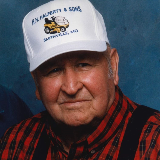 He was born on October 31, 1929 to R.C, and LaDora (Jones) Moore on the family farm in rural Edgerton, MO. Bob was a lifelong resident of Edgerton/Dearborn and he graduated from Dearborn High School in 1947. Bob served his country in the U.S. Army from 1951-1953 during the Korean War.

On December 7, 1962 he was united in marriage to Clarice Janet Nash. After their marriage they lived in Buchanan County for a few short years and in 1970 they moved to rural Dearborn where they made their home. Janet passed away on November 16, 2000.

Bob’s passion was always farming in which he did his entire life. In later years, he helped his wife Janet with her business, Moore Antiques. Bob loved his family, farming, “fried chicken” and his most important meal of the day, breakfast. Bob was a member of the United Methodist Church in Edgerton, MO.

He was preceded in death by his wife Janet Moore; his mother LaDora; his father R.C.; his step-father John Killgore; his brother Jack Moore and his sister Shirley Schaback.