In Remembrance of Billie C. Routh 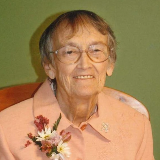 She was born on April 4, 1929 to Lois Claire (Alexander) and Bill Jennings in Cainsville, MO. She attended school in Kansas City and Smithville. In 1946 Billie graduated from Smithville High School where she was co-captain of the girls basketball team. After her graduation, she continued her basketball career, playing on a semi-pro women’s basketball team.

Billie retired from the U.S. Postal Service as the Postmaster in Easton, MO in 1991. In her later years, she continued her love for the post office by volunteering to deliver the mail to the residents at the assisted living facilities she resided in.

She was a member of the Ebenezer United Methodist Church, the United Methodist Women and Church Women United. Billie enjoyed spending time either with her sister or the “traveling gals” going to lunch, shopping, and collecting things that had meaning to her. She loved traveling abroad especially to Germany to visit her daughter and family. She also loved passing down her recipes and teaching her grandchildren her baking secrets especially her homemade ice cream.

Donations may be made to the Allen Cemetery.